To kick-off the summer, we decided to go on a roadtrip to Niagara Falls and Toronto in Ontario, Canada during Memorial Day weekend. From Minneapolis, Google informed us that it would take about 14 hours, so we planned on allotting two days just for roundtrip travel to make room for stops.

We were lucky to have family in Ontario, so we were able to stay with our cousin the entire weekend for free in Mississauga. Since we planned on spending time in both Toronto and Niagara Falls, staying somewhat in between the two cities worked well for us. Niagara Falls and Toronto are about an hour apart, so living in the middle of the two cities made our drive to and from either city less of a hassle.

However, there are a number of hotels ranging in prices on the hill above the waterfalls in Niagara Falls, some advertising amazing views of the waterfalls, for a price. Toronto is also a huge urban city, so lodging isn’t scarce, although prices in the heart of downtown Toronto may be high.

Since we drove from Minneapolis, Minnesota, we had our own car with us. Within Toronto and within Niagara Falls, public transportation, such as buses, seems to be an easy way to get around both towns.

Travel between both cities using public transportation, however, will need more planning. GoTransit is a commuter rail and bus system that can be used to travel between Toronto and Niagara Falls. Regional buses, such as Greyhound and Coach Canada, are also available. These methods may double the travel time compared to driving and some have limited run schedules throughout the day.

Although it fluctuates, the current exchange rate is at $1.00 US to about $1.35 Canadian, so we were able to stretch our US dollars a bit more. However, we did enjoy a few more full meals at restaurants than we usually do on our travels (and too many Nutella donuts from Tim Horton’s), so we did end up spending closer to our max budget for food. We spent about $15 for per person at an average restaurant. However, our best meal came from the food truck in Niagara Falls called Maxine’s Kitchen which serves a full meal of Jamaican food (e.g., goat curry or jerk chicken with rice and beans and a side salad and drink) for only about $10-12.

We also went clubbing on our first night in Toronto, which set us back $5 each and about $8 per drink. Our other larger expense was the waterfalls cruise we did in Niagara Falls, which was about $30 per person, but it was definitely worth the price.

Parking was also expensive, whether in Niagara Falls or in Toronto. Ramps in Toronto charged anywhere between $15-20 for a few hours, while parking lots close to the waterfalls in Niagara Falls charged about $18 per day. Street parking is also available in both cities, but they are difficult to find especially during the weekend. We realized that the best way to go in Toronto was to find a centrally located parking area that charges a daily rate instead of an hourly one. We just parked our car for the entire time we were there, then just walked everywhere.

Curry goat (above) and jerk chicken (below) from Maxine’s Kitchen 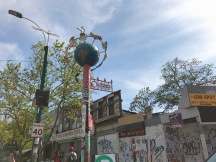 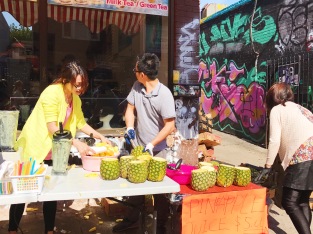 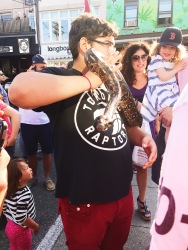 Husband and wife who love to travel wherever and whenever possible. He brings the spontaneity while she brings the foresight. Together, wherever in the world. View all posts by Almost Spontaneous

Travel tips? Insights? Destination suggestions? Please share, but please be respectful. We reserve the right to discard comments that attack us or our readers. Cancel reply